At 2:35pm Shrewsbury Volunteers were dispatched to assist the Glen Rock Fire Co. and EMS units with a reported vehicle accident with patient ejected.  Rescue 61 responded with 4 members and enroute the 911 center upgraded the call to reported entrapment.  Captain 59-2 (Glen Rock Fire Co.) arrived and established Command 59.  After a few minutes Command advised all patients are out of the vehicle and the car is on fire.

Rescue 61 arrived and assisted as directed by Command 59.  Personnel finished extinguishing the fire (Captain 59-2 used extinguishers to knock the fire down) and remaining personnel assisted EMS.  Rescue 59 arrived and also assisted with the incident.  Two patients were transported to York Hospital by Glen Rock and Rose EMS units.  Rescue 61 was cleared by Command 59 at 3:06pm. 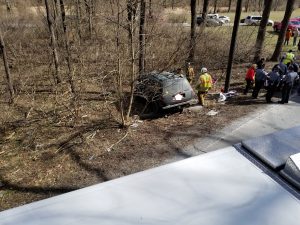 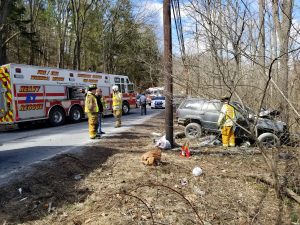