York ATR units responded to assist Delta-Cardiff Fire Company with a reported person through the ice on Atom Rd in Peach Bottom Township.  Enroute emergency services units were advised by York County 911 that a single subject is on the ice and thrashing about calling for help.  Delta-Cardiff Station 57 and Southern York County EMS units arrived and met with witnesses on site.  They advised the subject has disappeared under water.  York County ATR units were advised of the situation and also Harford County, MD technical rescue team is also enroute by request.

Technical rescue personnel arrived and immediately initiated search protocols on the ice and water in an attempt to find the subject.  After some time of searching rescue personnel acknowledged the subject was most likely submerged and a dive team will be needed.  Dive team personnel from Harford County and Baltimore City were dispatched and arrived to assist in the recovery efforts.  Certified dive personnel must follow protocols developed to keep any submerged rescuers safe.  Once the action plan was agreed upon divers and ice technicians were assigned and the search for the subject began.

The first step was to deploy a sonar unit by the Baltimore City Fire Department personnel.  This sonar device will be lowered to the bottom of the lake and once in place provides members on shore with a picture of the underwater environment.  It was hoped once deployed the sonar unit would show the location of the missing subject.  Personnel went out onto the ice and deployed the sonar unit into the broken ice and water and down to the bottom.  The sonar device was measured to be in 25 feet of water once it made contact with the bottom of the lake.  It was turned on and within minutes the missing subject was found.  With the information gathered dive personnel are now able to enter the water and recover him.

Divers and ice technicians entered the water and recovered the missing subject.  He was brought to the surface and then to shore.  PA State Police investigators along with other agencies began their investigation into the incident.  With the subject delivered to waiting EMS and police officials all technical rescue personnel began demobilization activities.  All equipment was removed from the ice and water.  A debriefing session was held and all departments, once equipment was secured, left the scene.

Shrewsbury Volunteers reminds everyone to only enter ice covered ponds and lakes once they are determined safe by the owners of the property.  If you fall through ice into the water hypothermia sets in immediately and within minutes your capacity to control your movements are almost gone.  If you witness such an incident IMMEDIATELY call 911 and try to keep contact with the subject until emergency providers arrive. 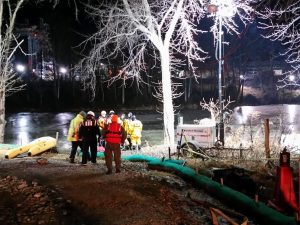 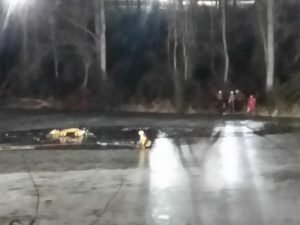 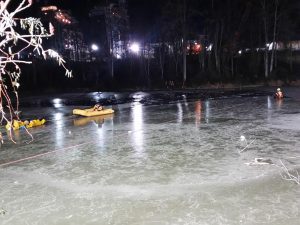 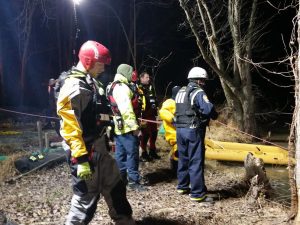 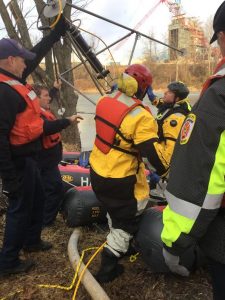 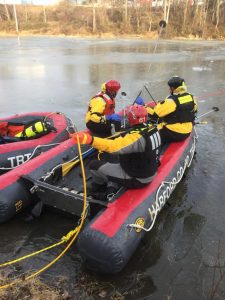 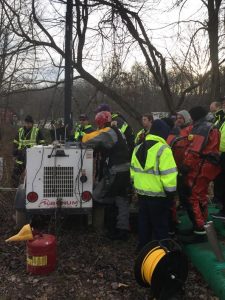 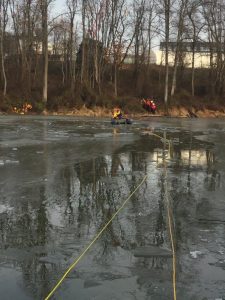 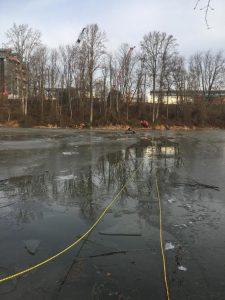 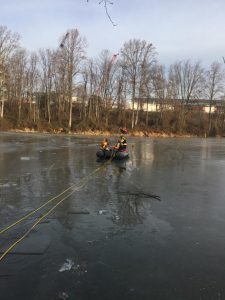