At 1:09 am Shrewsbury Volunteers we’re alerted for a reported multi-vehicle accident on Interstate 83 at the Hain Road bridge.  Rescue Squad 61 responded and encountered was told by York County 911 several calls were received stating vehicles are damage in both the north and southbound lanes.

An assistant chief from Station 63 arrived and advised a tractor trailer has traveled through the concrete median and is overturned in the southbound lanes.  There is someone on the ground.  Vehicles are also stopped and damaged in the northbound lanes.  Rescue Squad 61 arrived and Command was established by Chief 61.  EMS from Rose EMS arrived and assumed patient care of the truck driver.  Engine 63-2 ( Loganville) arrived and deployed a hose line.  Traffic units from Eureka and York Twp FD’s we’re called to help establish safe zones for crews working.  Exit 8 was shut down southbound and all trapped traffic was cleared from southbound 83.

As of 03:30 crews are working to clear the interstate.  Southbound is completely closed at Exit 8 and Northbound has the fast lane closed from mile marker 6 to 7.  All traffic Southbound is being diverted to the Susquehanna Trail at Exit 8 by Traffic 19 from York Twp.  Updates will be provided later when the roadway is cleared. 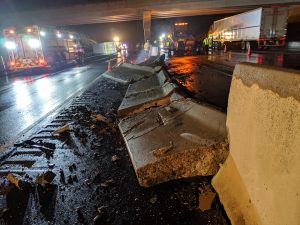 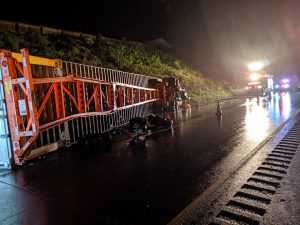 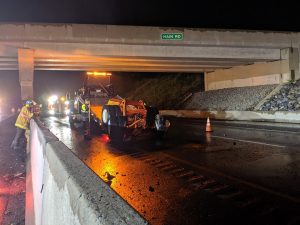 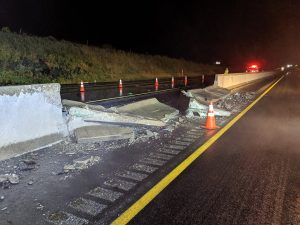 Gordon’s Towing now has the tractor upright and separated from the trailer.  Work continues to get the wreckage removed from Southbound 83 so PennDot can do road cleanup and center median repair.