At 02:30 hours Rose Fire Co was alerted for their engine and EMS for a reported accident with injuries near Steltz Rd and Bowser Rd in Shrewsbury Township.  MICU 58 responded and on arrival found a vehicle into a pole with injuries.  Shrewsbury Volunteers was alerted at 02:37 to cover for Station 58.  Rescue 61 responded with 5 members and on arrival assisted MICU 58.  Shrewsbury Volunteers had additional fire police units dispatched as the roadway must be closed because of a snapped utility pole and wires down.

Utility 61, Fire Police Captain and Lieutenant 61 responded and provided traffic control until 05:00 when Met Ed arrived to secure the scene.  Bowser Road was still closed when Shrewsbury Volunteer personnel cleared the scene.  Pennsylvania State Police were in charge of the accident investigation. 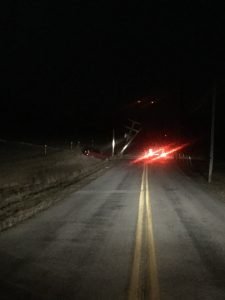